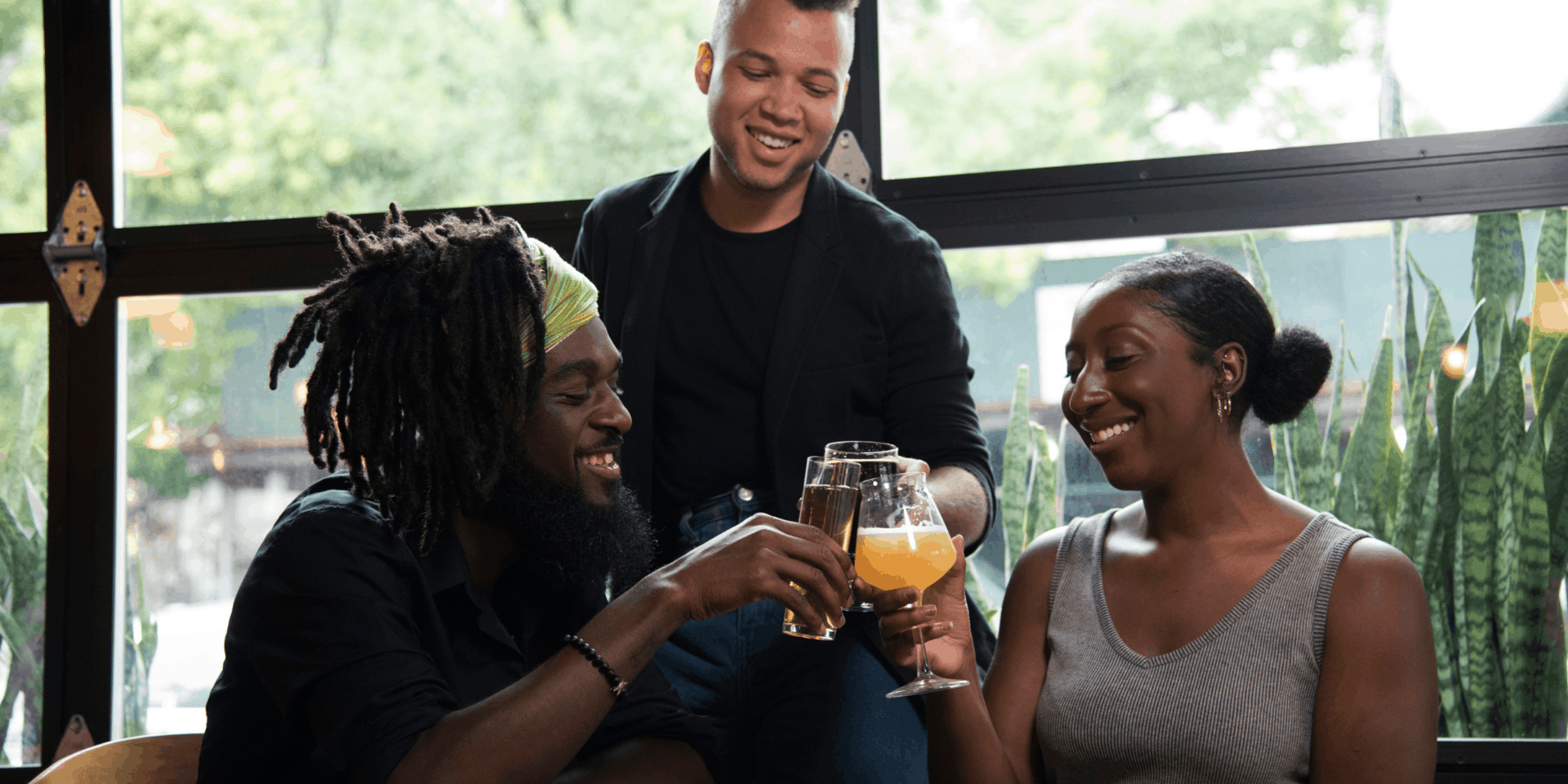 I’ve always had a theory about how beer can bring people together. I believe that if you sit a pint of beer in front of two people from different cultural backgrounds, they’ll be able to find some common ground. Of course, this doesn’t apply to those who don’t drink, but you wouldn’t be reading this article on this website if you don’t enjoy a good beer. Whether it may be going out with friends on the weekend for that oh-so-refreshing-after-work beer, nothing tops the first sip of an ice-cold beer. As passionate as I am about beer, I still ask myself one question, why don’t I see that many people who look like me in the craft beer industry? 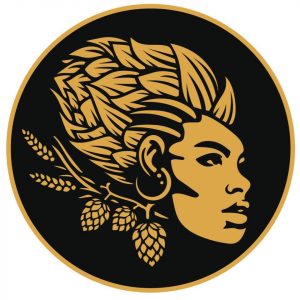 Earlier this year, Black Calder Brewing in Grand Rapids, Michigan, opened and became the first Black-owned brewery in my home state of Michigan. I had the opportunity to reach out to the brewery for an interview.

Terry Rostic and Jamaal Ewing are the owners of Black Calder Brewing. Both are Michigan natives and have spent over a decade around the beer industry learning from different brewers and brewery owners. Black Calder was formed with the mission to brew dope beer for dope people and provide a platform for art, innovation, culture, and inclusion within the craft beer community. Coming from a similar background, I’m glad that I had the opportunity to interview Terry and Jamaal. 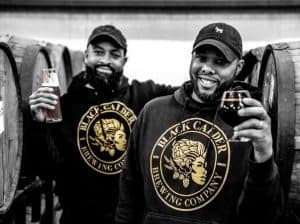 How did Black Calder come to be?

Black Calder started with a dream and a glass. Jamaal and I (Terry) spent years supporting local breweries and crafting homebrew creations. We met in 2016 and had an instant connection and started down the path of doing something DOPE in the Craft Beer industry.

What got you into beer? Did you have someone you looked up to that guided you to this career, or did it happen naturally? How long have you been in the industry?

Terry: I have been in the industry for over a decade as a fan, supporter/beer geek. I say my journey in craft beer started with Kool-Aid. I have always loved flavors and trying to make something unique. I would try and craft creations that made people want more. Beer is like an adult Kool-Aid to me, but healthier because it has less sugar than my Kool-Aid. I respected all of the brewers that I came across, but I really looked up to Dave Engbers from Founders. I met him years back before I wanted to start a brewery and took time out of his day to answer all of my questions and just really gave me the time of day. This guy was making great beer at a very high level, and he still managed to take time to answer my questions and provide advice when I called. That is the type of brewery owner I plan on being.

Jamaal: I’ve been drinking beer since college. My favorite beers back then were Heineken and Corona. I had my first craft beer after playing beer pong at a house party with a keg of Natural Light. I was looking for something else to drink after the game, and somebody handed me a can of Two-Hearted; I’ve been into craft ever since. When I moved to Grand Rapids after graduating, I started expanding my horizons in craft beer. From there, I was a fan up until 2016 when I met Terry, and we started talking about opening a brewery. Since then, I’ve been trying to make as many connections as possible and learning the craft through home brewing. I’ve connected with brewers in West Michigan and Lansing that have been extremely helpful along the way.

How did you take a passion for homebrewing and turn it into a business?

Terry:  Perseverance! We just keep grinding and trying to find our way into the industry. We started studying the art of beer, making more, and really came together to define the imprint we wanted to make on the industry. This craft beer thing started with a Mr. Beer kit for me. Then I started asking brewers if I could hand out or help on my off days at work. From there, it gave me some confidence to keep going. Most brewers don’t have a fancy degree or shit like that. They got and learned their craft from the “mud,” which is always a beautiful thing. Right now, I am building the plane while flying it, and I don’t plan on crashing. The ride might not always be smooth, but I am sure as hell going to enjoy it.

Jamaal: I started homebrewing with all-grain kits and an all-in-one system. After I got a couple recipes down, I started reaching out to brewers to shadow them on brew day. I just love the process of creating, it’s cool to play around with different beer styles, and there are endless variations you can come up with. I figure if I can do what I love every day and make a little money, why not?

As a cis black man in the craft beer industry, I’ve always wanted to get more Black people and People of Color into craft beer. How would you introduce someone to craft beer whom may only be familiar with today’s domestics?

Terry: Buy them a beer! I managed to get my mother into Craft Beer, and she wasn’t a drinker. I think the best way to get anyone into craft beer is to buy them a beer and tell them a story or the story about the beer. Once you start explaining where this hop came from or what barrel this beer was aged in, or the flavor profile, most people will at least take a sip. It’s not like you are giving someone sour pickle juice. Black people are flavorful people. We have always made something out of nothing when it comes to food and drinks. Craft beer is the perfect industry for us to get into. There are so many foods from our culture that we can make a beer to pair with it makes me so excited for the future.

Jamaal: Similar to Terry, I would invite them to a brewery and buy them a flight. You really don’t know what you like until you try it. There are so many flavors out there it’s hard to judge craft beer, or even a particular style for that matter, on one or two beers. If you like beer, you’ll find something (or several) in the craft that you enjoy. You just have to start drinking.

How important is it to you to be the first Black-owned craft brewery in Michigan?

We don’t care about titles. There have been many Black people in the craft beer industry in Michigan with ownership and other contributions. We like to say we are one of the first Black-owned breweries because we are all in this together, and we all should be recognized.

What is currently your favorite style of beer to drink?

Terry: Stouts, big dark high-ABV stouts. Double digits and up with vanilla or other flavors.

Jamaal: Hazy NEIPAs and DIPAs. I love the fruit/hop combinations brewers are coming up with right now.

Why do you think inclusion has been a problem in the craft beer industry for so long?

Terry: I am not sure there is an inclusion problem in the industry, but I believe most breweries don’t make an intentional effort. From my experience, most brewers just want to make beer and don’t care who drinks it. If you don’t intentionally include people, you will, without a doubt, exclude knowingly or unknowingly.

Jamaal: I think the lack of representation in the industry has a lot to do with it. From ownership to taproom staff, most breweries I’ve visited are largely white, which is then reflected in the customer base. Inclusion in the craft for me as a Black man is seeing themes representative of my culture in the beer I’m drinking and the taproom atmosphere. That can only be done authentically by Black people. Obviously, I’m referring to only one aspect of diversity, but I believe the more you see Black and Brown ownership/staff, the more Black and Brown consumers will join the game.

Once you get a permanent location, will you have food as well? What would the menu look like?

Yea, we are going to have great food. More of a down south/New Orleans theme. There are a lot of flavors that come from that area, and we’re excited to pair our beers with the unique dishes we have in mind.

Do you plan to collaborate with any other breweries in the future?

Yes, we are currently working on that right now. We have some big names lined up. Details will be coming soon.

As far as beer, what are you currently brewing?

Terry: We are brewing our Bougie S’More stout. It will be a 9% or so stout with Graham crackers, marshmallow, dark chocolate, and peanut butter.

Jamaal: We’re also working on another can drop for January to be announced.

Is there any plan for on- or off-premise distribution in stores or bars in the future?

That is the hope for early 2021. We would love to get our beer to the east side of the state and a few other areas around the country that have shown some interest.

What advice would you have for another Black person or person of color who may be interested in a career in craft beer?

Just do it! We, as a people, have so much greatness and ideas inside of us. Get a beer kit and start hustling.

Black Calder released their first beer, the Black IPA, on Nov 27th. The 7% ABV brew was met with great anticipation, and orders for the Black IPA sold out almost immediately. I have not had the opportunity to try it yet, but I plan on placing an order on their site for shipping or making the trip to Grand Rapids very soon. The motto of Black Calder is, “We make dope beer for dope people.” No matter what you look like, your background, or sexual orientation, if we can have a pint together, you’re cool in my book. Just like our website says, Beer is for everyone. 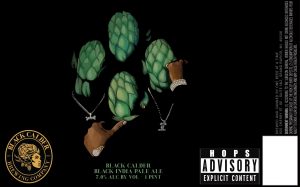 The platform that Terry and Jamaal are starting to provide for the culture is definitely one every beer head should pay attention to. Craft beer has a long way to go with representation; however, in my home state of Michigan, Black Calder Brewing’s birth gives the industry a crucial first step to get to where we should be.

Ever since I’ve gotten into craft beer, my goal has been to get more people that look like me into craft beer. The craft beer industry is a fun yet challenging industry, and I am proud to be a part of progress. In 2018, I left a comfortable desk job to work as a merchandiser for a major beer distributor, shortly after became a sales rep. Fast forward a couple years later, I’m currently working directly for a brewery, started a craft beer and music podcast, and I’ve recently accepted a position as a brewer. Not saying that everyone who is into beer should make the same choices I did, but I think you should take a risk on something you’re passionate about. Who knows, the first sip could be the critical step to a different reality.

The Ratmagnet Effect: What We Learned and What Was Left Unsaid
June 29, 2021